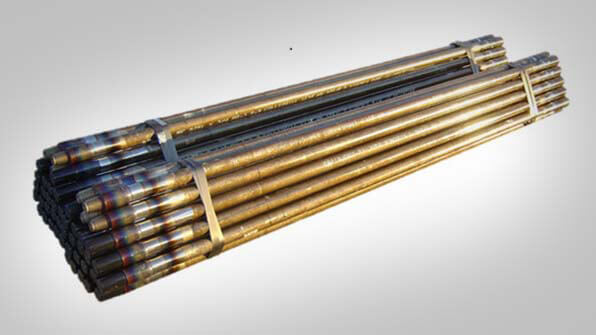 The drill tools transfers the driving force from the rig to the drill bit through rotational energy and thrust. The rods are also hollow which enables the supply of drilling fluid to keep the components cool and to transport the cuttings back to the surface. Some level of directional control is possible by stopping the rotational motion and pushing on the string where the drill bit will then shift it's alignment whereby the pressure of the soil on the slanted edge will cause a change in direction. Cables are also routed along the drilling tools which communicate with sensors.

The drill pipe is characterized by burst, collapse, tensile and torsional strength. These specifications are used to select the appropriate drill pipe for a particular drilling operation.

The drill pipe can be exposed to many stresses:

Tension: due to hole problems, an over pull can be exerted causing extra tension on the drill pipe (ex: stuck pipe). This tensile load can lead to drill pipe failing.

Torsion: Bad hole conditions can increase the twisting force and torque on each joint leading to poor rotation transmission from the surface to the bottom.

Also there are other causes of fatigue like abrasive friction, vibration and bit bouncing off bottom.

Corrosion is also another issue which can affect drill pipe strength; corrosion can be due to presence of dissolved gases and acids. Carbone dioxide can form acid dioxide which can lead to steel corrosion.

The hydrogen sulfide can be present in the formation. It can cause hydrogen embrittlement or sulfide stress cracking. The surface of the steel absorbs the hydrogen in the presence of the sulfide. When the concentration will be greater than a certain level (less than 13 ppm), cracks can appear on pipe body. The combinations of stress and cracks leads to pipe failure.

The tool joints provide screw threads in order to connect drill pipes together. The seal is guaranteed by the shoulder/shoulder connections between pin and box. Hard facing material is welded on the surface to protect the tool joint from abrasive wear when rotating drill string in the borehole or when making connection by rig tongs. This layer of hard facing material can be replaced in workshops when it becomes depleted due to excessive wear. The internal diameter of the tool joint is less than the internal diameter of main body. The same stresses applied on the drill pipe during drilling operations are subjected on the tool joint, but also there are other additional issues:

- During operations, frequent engagement of box and pins can be done harshly which can damage the threads.

- When tripping out of the hole, the last tool joint support all the weight of the string beneath it. 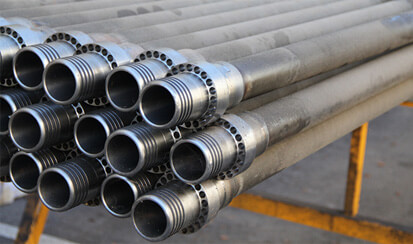 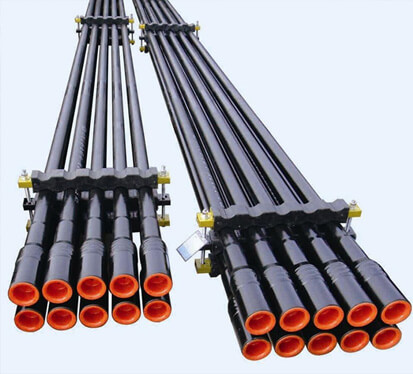 We provide a complete line of drill string products, including a full range of drill pipe in nominal sizes from 2-3/8” to 6-5/8” and in a wide range of wall thicknesses. 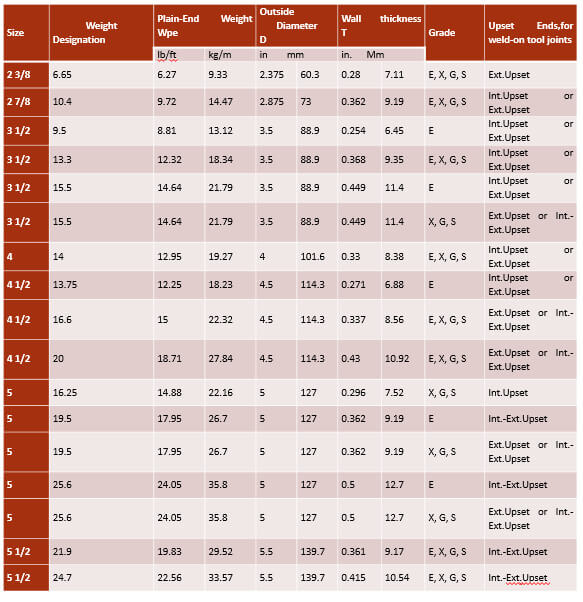 - The sharp difference in cross section between the drill pipe and drill collars.

- The difference in stiffness between the drill pipe and drill collars

- The bouncing caused by the bit while drilling

The heavy weight drill pipe is characterized by many features:

For operations, the heavy weight drill pipe should be operated in compression; in order to maintain the compression while drilling highly deviated wells.

Heavy Weight Drill Pipe (short for HWDP) is an intermediate weight drill stem component which is used in conjunction with the drill pipe and drill collars. In some applications, heavy-weight also can be used instead of the drill collars.

Connections are completed phosphate coated to protect them from the elements after machining and to help prevent galling upon initial make-up;

Thread roots are cold rolled on API and H-90 connections. And pressed steel thread protectors are supplied for standard connections;

Hard banding and Internal Coating can be provided on customer’s request. 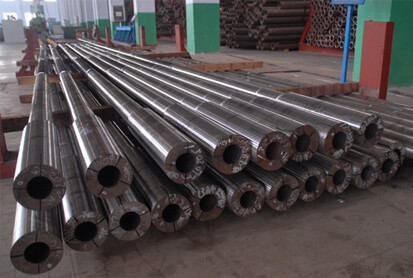 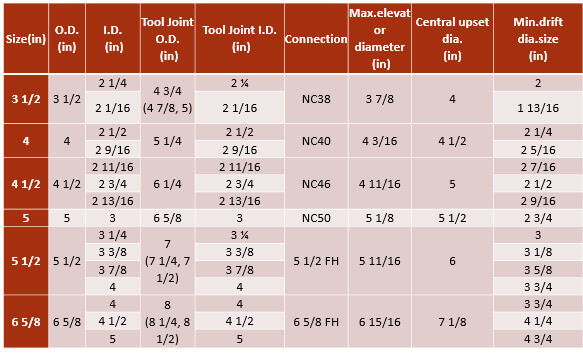 - Provide the required weight on bit while drilling

The connection thread of a drill collar can be machined directly on the body due to the large wall thickness. In order to prevent failure, correct make up torque has to be applied. It is very important to handle drill collars carefully.

Shoulders and threads should be lubricated with lubricant containing 40% to 60% of metallic-zinc powder.

Similarly, to drill pipe, drill collars are subjected to different stresses caused by:

There are other types of drill collars used for special operations:

- Spiral drill collars are used to avoid stuck while drilling through highly porous formation. The stuck can occur when high overbalanced of mud pressure is applied or while drilling high deviated wells. Among the methods used to minimize the risk of differential sticking is reducing the contact area between the collars and wellbore. In order to reduce the surface contact, spiral grooves are cut on collars. 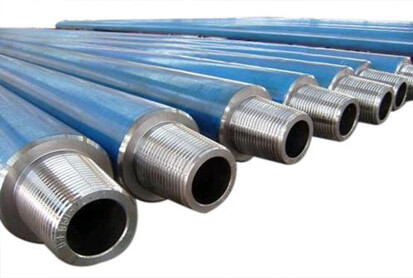 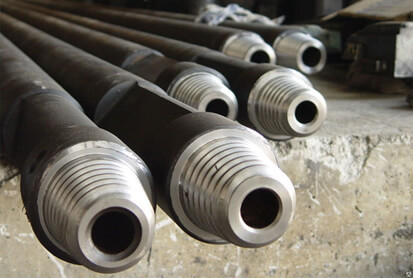 A hardness range of 285 to 341 BHN and a Charpy impact value of 40 ft-lbs are guaranteed at evenly distributed 16 points in any sections at room temperature;

Connections are completed phosphate coated to protect them from the elements after machining and to help prevent galling upon initial make-up;

Thread roots are cold rolled on API and H-90 connections;

Pressed steel thread protectors are supplied for all drill collar that are equipped with standard connections When ordering Please specify; 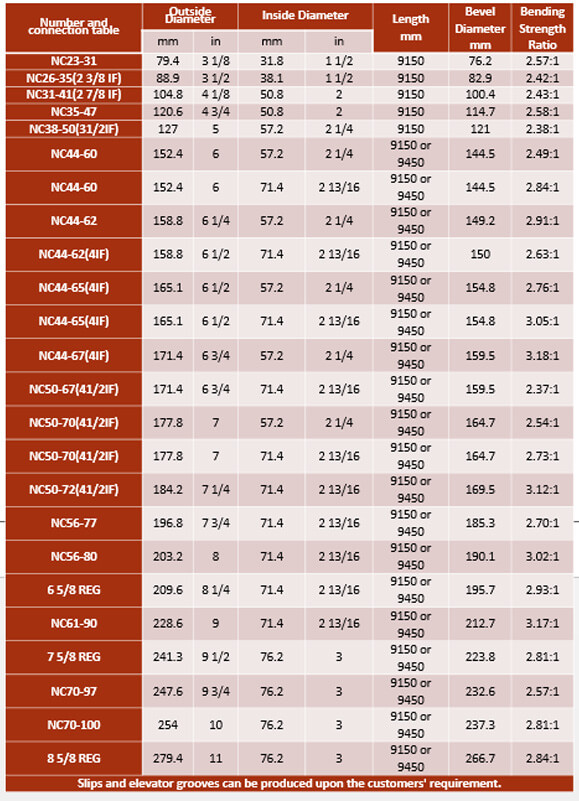 Kelly is used to connect the topmost joint of drill pipe for drill stem turning when the rotary table runs. Petrosadid supplies both square kelly and hexagonal kelly. 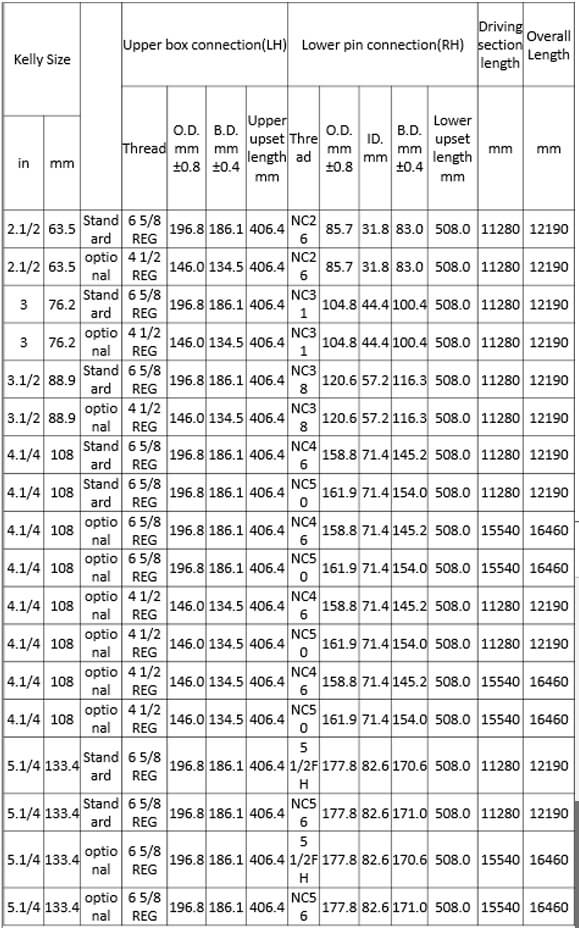 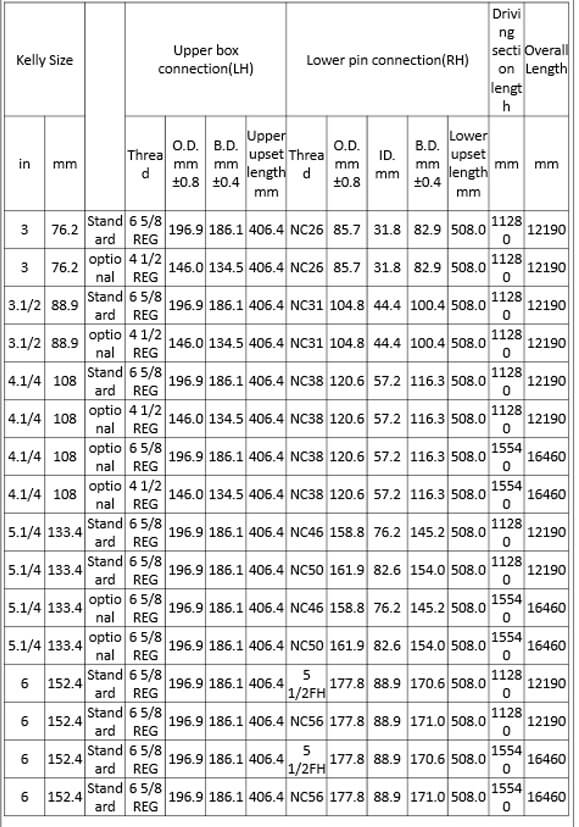